Hi guys!  Today I was roaming around our PX (military's version of a general store) and I came across this beautiful color.  I'm a fan of orange because I am a fan of Oklahoma State (GO POKES), however, I don't usually wear it on my nails.  Today, though, I ran across this color and I knew I had to have it.
It is called Charmed and it's a Revlon Top Speed polish.

Here's a macro shot of the bottle: 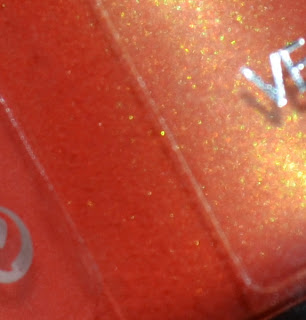 It's your basic citrusy-orange color, but it has a golden shimmer hidden in it that makes it look like burning embers.  I'm so in love with this color.  It's really nice, especially since it's been so cold and dreary outside.  It reminds me of the Sun on my nails, even when it's not in the sky. 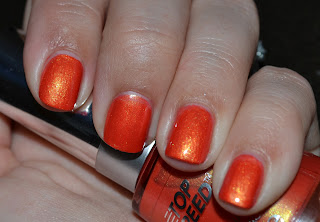 Here's the swatch of it on my nails.  Doesn't it look like my nails are on fire.  You just sang a little bit of "This Girl is on Fire", by Alicia Keys, didn't you?  :)

Moving on, so since I live in Germany, we don't get regular cable TV.  We have an Apple TV and a Roku box to watch TV on, and we have subscriptions to Netflix and Hulu.  Well, recently, I ran out of things to watch and I came across a Hulu Exclusive Series called The Only Way is Essex.  It is basically Britian's version of the Hills, and I love it.  I'm a bit of an Anglophile anyway, and I'm a sucker for cheesy reality shows such as this, so needless to say, I'm HOOKED.  The only downside is that now I read and think in a British accent.  Not kidding.  Have you seen this show, and do you love it like I do?